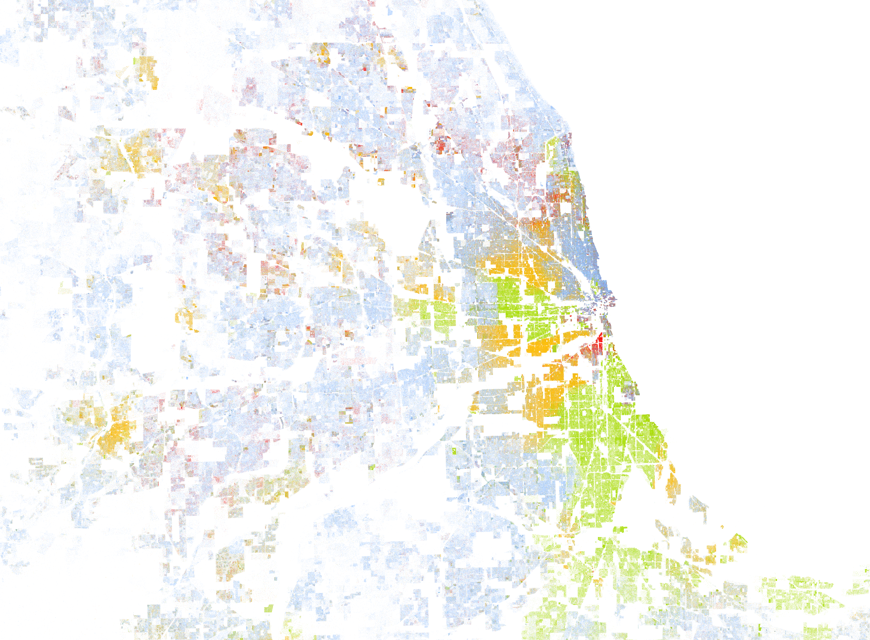 Present-day view of the portage de Chicagou, one of the crossroads of the Pays d'en Haut, from the new map created by Dustin Cable of the University of Virginia’s Weldon Cooper Center for Public Service.

From the Wired piece on Dustin Cable’s new map that I linked to yesterday:

Looking at the map, every city tells a different story. In California, for example, major cities aren’t just diverse, they’re integrated to a great degree, too. We see large swaths of Sacramento dotted variously with reds, blues, oranges, greens and browns. Los Angeles is more distinctly clustered, but groups still bleed into one another.

In the Midwest, though, the racial divide can be shockingly exact. In Chicago, bands of whites, blacks, and Latinos radiate out from the city center like sun beams. In St. Louis, a buffer of a few blocks separates a vast area of largely black citizens from another of white and Asian ones. In Detroit, the most segregated city in America according to one recent study, there’s no buffer at all. We see how 8 Mile Road serves as the dividing line between two largely homogenous swaths–one predominantly white and one predominantly black.

But the map doesn’t just tell us about distinct cities. Cable points out how the area comprising the Northwest Territory–Ohio, Indiana, Illinois, Michigan, Wisconsin, and Minnesota–sees a good deal of population distributed by major roadways, as opposed to the states in the East where the populations often developed along natural features (compare the sweep of dots in Eastern Pennsylvania to the same area in this detailed map of the area’s rivers).

I’m pleased that Wired included Cable’s second point about population distribution in the Midwest. The Midwest is more than just Chicago and St. Louis, or even other major metropolitan areas like Minneapolis, Milwaukee, and Detroit. What Wired doesn’t say, though I suspect Cable knows, is that the Midwest is also much more than a bunch of metropolitan areas strung along major roadways. Before the roadways came the railroads and population centers like Omaha and Kansas City. Before the railroads, settlements — including Chicago, St. Louis, Minneapolis and Detroit, but also places like Green Bay, or Pepin, or West Lafayette — were founded along the waterways that tied the region, and much of the early United States’ western economy, together. Many of those cities can trace their roots back to the frequently multi-racial, multi-ethnic fur trade settlements — Fort La Baye, Fort Beauharnois, Fort Ouiatenon — active in the Pays d’en Haut (Upper Country) of New France. Indeed, this pattern of water-dictated settlement doesn’t contrast with, but in fact matches the pattern in eastern Pennsylvania of settlements along the Allegheny River anchored by Fort Duquesne (now downtown Pittsburgh) and Fort Presque Isle (present-day Erie, PA).

At the same time, the “bands of whites, blacks, and Latinos” which “radiate out from the city center like sun beams” Wired ascribes to Chicago may just as well describe Baltimore, a city whose problems with race and ghettoization I’ve previously discussed: 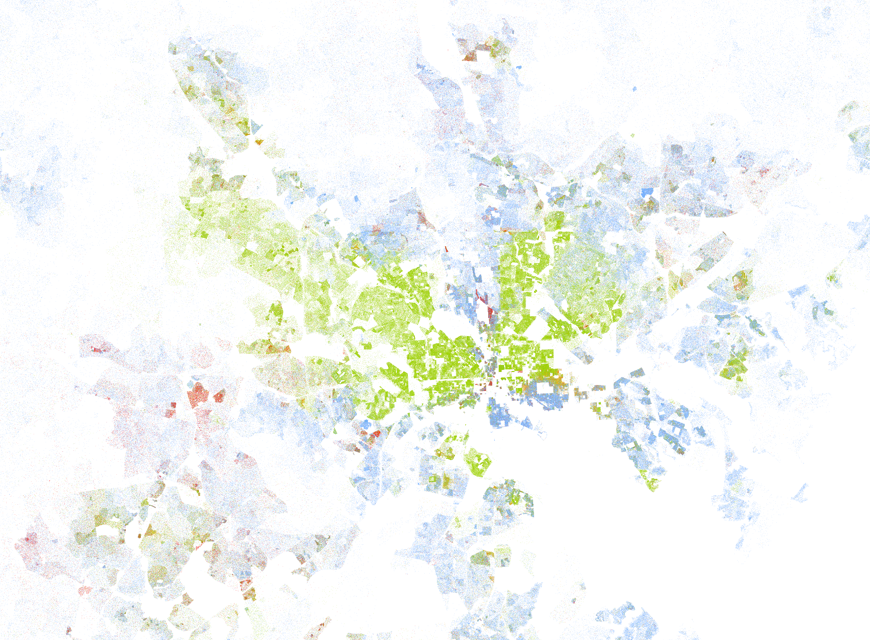 Baltimore metropolitan area, from the new map created by Dustin Cable of the University of Virginia’s Weldon Cooper Center for Public Service. 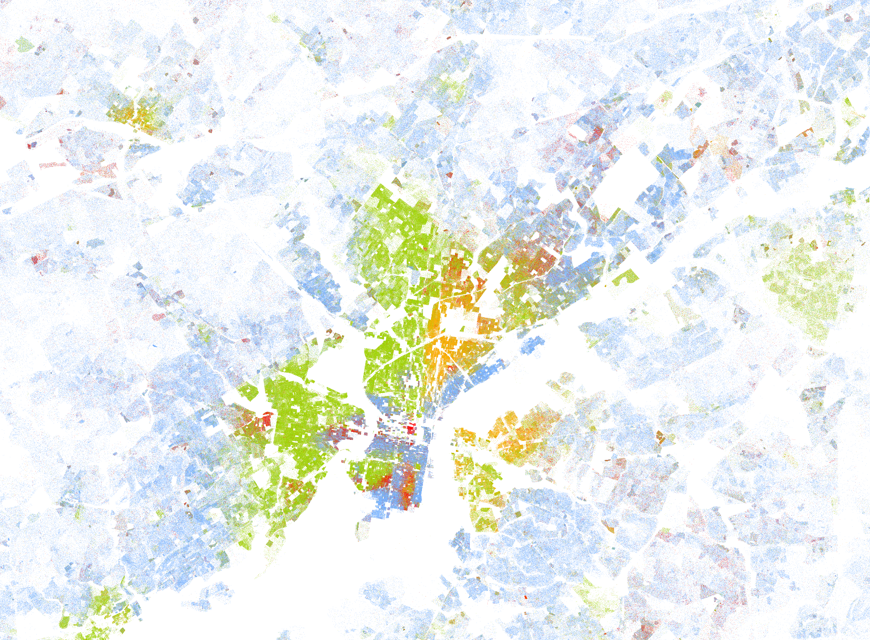 Philadelphia metropolitan area, from a new map created by Dustin Cable of the University of Virginia’s Weldon Cooper Center for Public Service.

For whatever reason, Wired didn’t have much to say about the East. When viewed from the same level of zoom on the map, much of metropolitan New York doesn’t resemble the integrated diversity of Los Angeles or San Francisco so much as it does its patchy Eastern and Midwestern brethren: 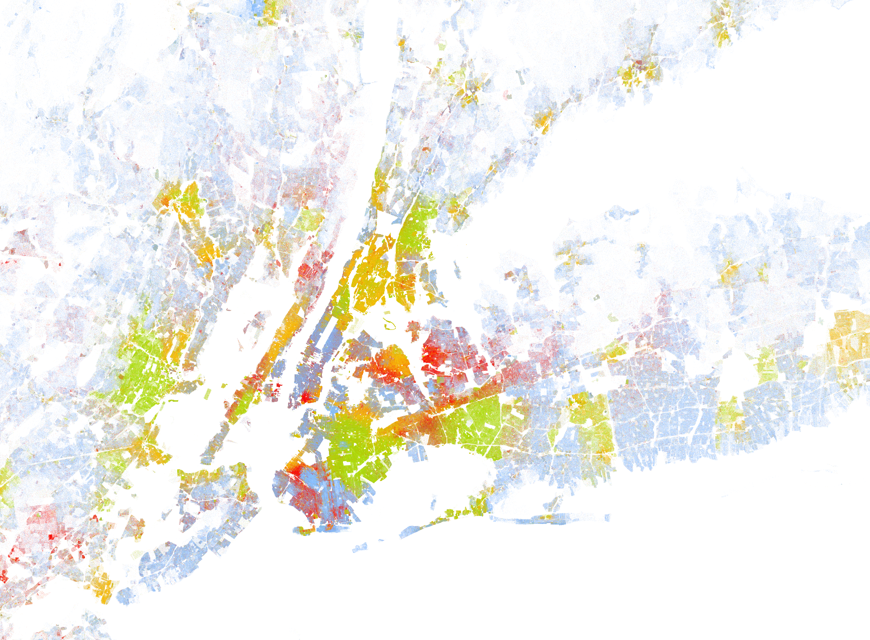 New York metropolitan area, from a new map created by Dustin Cable of the University of Virginia’s Weldon Cooper Center for Public Service.

At any rate, as a historian, Wired’s sloppiness regarding settlement along roadways vs. waterways bothered me. Settlements in the Midwest existed well before the region was part of the young United States’ Northwest Territories, before it was connected to the East via railroad, or within itself via highways. Those early settlements of Indians, French, and the métis are noteworthy part of a longer history of American urban diversity, and worth remembering as we continue the struggle for integrated diversity in the urban Midwest. And, I might add, the urban East.