The last few months I was in Iraq I was stationed on this tiny-ass FOB (FOB Trebil/FOB Givens, on the border with Jordan) way out in BFE. There was a mosque right next to our perimeter, and the mosque’s minaret overlooked our entire position, which was somewhat unsettling for us. The minaret overlooking the FOB.

At the time, I was working a 12-on, 12-off schedule. For twelve hours, from 1800-0600, I stood watch in the COC (Command Operations Center), monitoring the satellite uplink and the shortwave radios, and (since the Sergeant of the Guard liked catch a few Zs at night) regularly conducting radio checks with the guards posted on the roofs of our buildings. Most of the time I was one of five or so people awake on the entire FOB, which was a bit disconcerting in the event that anything seriously ill went down in the night. 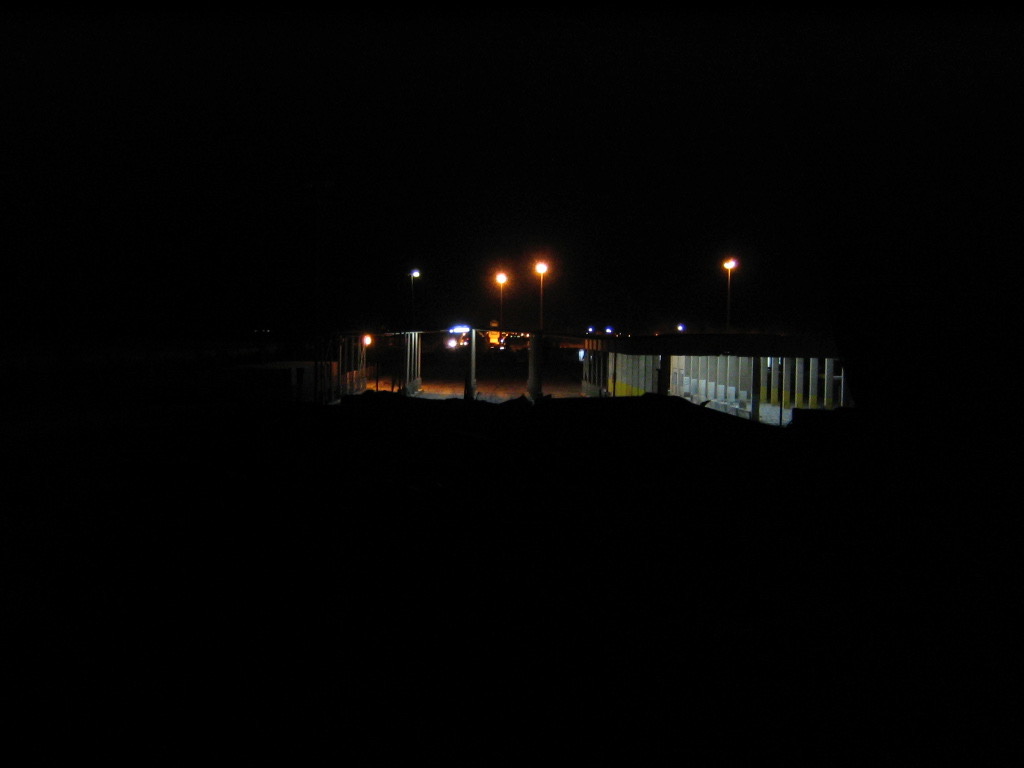 Looking toward the Jordanian border, marked by the lights just beyond the structure in the middle ground, at night.

I’ve always been a night owl, so the late shift didn’t bother me. I was posted on that watch because I was a digital communications guy, not a radioman, so there wasn’t really anything else for me to do on the FOB, making the job was mine more or less by default. It was something of a vote of confidence in my sense of personal responsibility, since I was directly responsible for keeping us in contact with Camp KV, the next nearest base, which was over two hours away. Help would be a long time in getting to us, should something really bad happen, but apparently I enjoyed enough of the platoon commander’s trust to be the one guy who absolutely had to remain awake through the entire night.

The longest part of the night was always 0300-0500. The platoon commander sometimes stayed awake until 0200, but by zero three the last guard shift had taken their posts and just about everyone else on the FOB was asleep. I’d call the guard towers every so often to make sure no one was drowsy, or in need of coffee, but other than that I was generally left to my own devices. I read books on politics and issues of The Atlantic my dad regularly sent me, listened to music on my laptop, and stepped outside every so often for a tobacco snack. Cigarettes were cheap out there. I could get two packs of Sumers and a two-liter of Syrian orange soda for under two bucks at the local Iraqi truck stop, and my habit had grown over the deployment to about two and a half packs per day. The minaret at night (at center), marked by the green and blue lights.

My habit was to get a radio check with the other base just before 0500. Around that time, the muezzin at the mosque would begin chanting the adhān for Fajr, the prayer at sunrise. I loved to go stand outside under the slowly lightening sky and smoke, listening to the eerily beautiful call. Though I didn’t know the meaning at the time, the last line of the adhān is “As-salatu khairum minan naum” — “Prayer is better than sleep.” The call to prayer always filled me with a sense of peace, because, ironically, an hour after the call began my relief would show up, and I’d retire to my rack in the squad bay for a few hours of sleep. For me, the call represented the end of the last hour of the day I could enjoy as my own, uninterrupted by the demands of others, the oppressive and ever-present heat of day, or the noise of a lively squadbay intruding into my fitful sleep as I lay beneath my poncho liner.

Given the events which unfolded yesterday in Iran and carried on into the night, and finding myself awake at this early hour of the morning, I feel it somehow appropriate to remember in my own prayers the Iranians struggling for a greater role for civil society in their country. And although I don’t smoke anymore, before I go to bed I’ll listen to the adhān again and remember what my life was like five years ago in that corner of the world. I hope the events of the next few days change the political climate in the Middle East for good in a way my own country hasn’t accomplished in the six years we’ve been meddling over there.

We come nearest to the great when we are great in humility. Animation discovered via Andrew Sullivan’s Daily Dish. There are a couple things which seem incredible and noteworthy about this representation of